in addition to the stereo cameras and VIsTrak camera.

All cameras and lights are built into the ceiling mounted case. 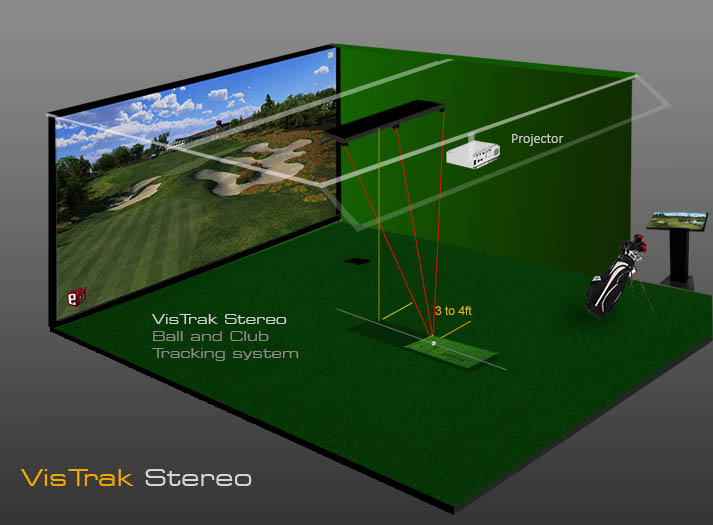 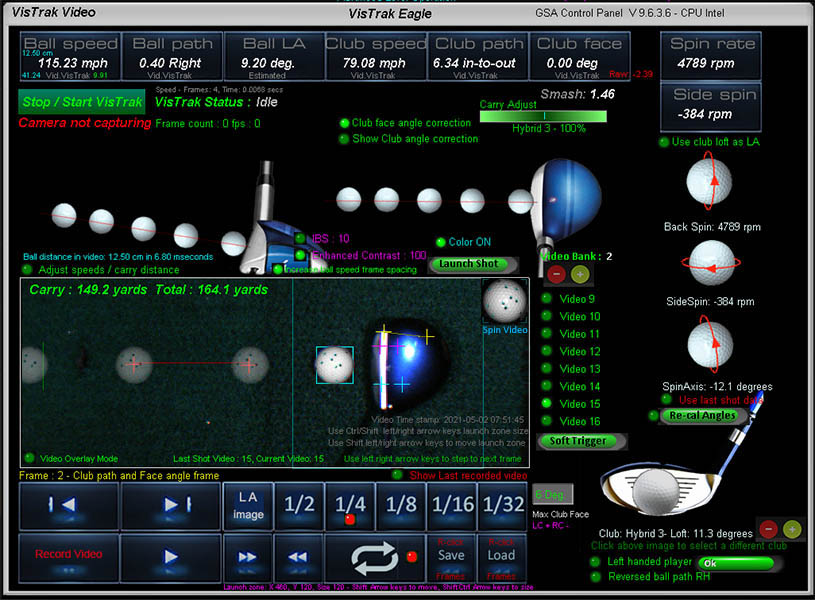 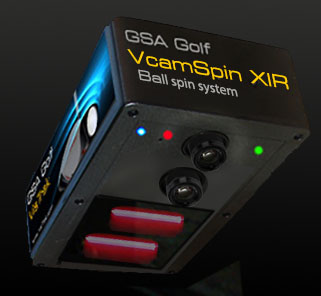 Note: This system is currently in development. 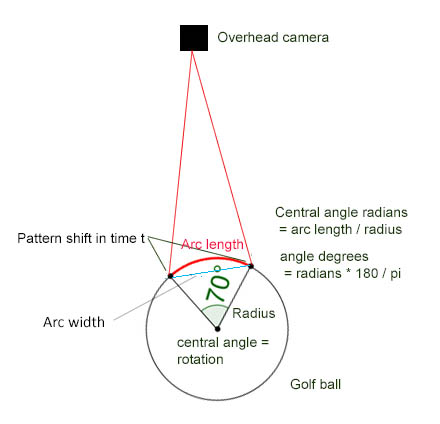 A little math is required to deduce the spin rate from the circle arc measured from the rotating and shifting key point pattern on the ball.

Knowing the circle arc length (i.e. the vertical shift of the key point pattern on the ball as viewed from above) and the radius of the ball, the arc central angle can be calculated.

This arc central angle is the rotation in degrees (or radians) for a given time between the two frames (1 ms) and from this, the spin rate can be calculated. 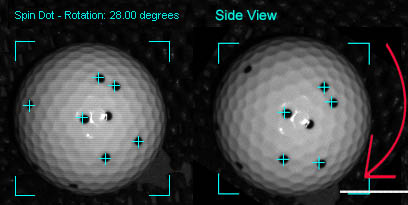 Side view of ball spin rotation 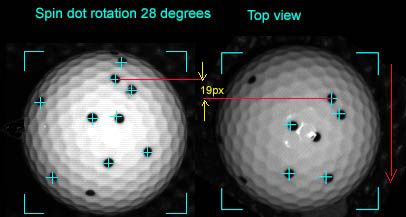 1. Detect ball in both frames

2. Detect all spin dots with coordinates in both ball images

3. Translate all spin dot coordinates to an origin

4. For side view camera: Rotate spin dots in frame 2 in 1 degree steps thru 360 degrees

For top view camera, shift spin dots down in frame 2 in 1 pixel steps

5. For each step, run a dot matching routine to see if the spin dot pattern matches in both frames and store match result

For side view camera: the degrees of rotation are the best match result

For top view camera: vertical pixel movement has to be converted to degrees.

7. Convert rotation in degrees with frame timing to rpm.

The big advantage of using balls with dot markings around them, is that you don't have to bend down and align the ball logo to the camera for every shot.

i.e. you can just place the ball on the hitting surface willy-nilly - guiding it with your club or foot - and the system will still detect the correct spin rate and axis 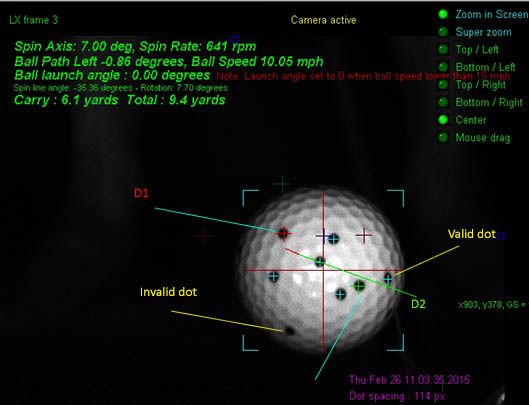 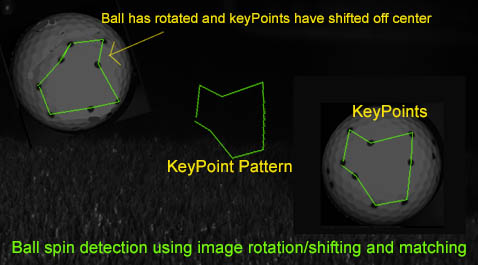 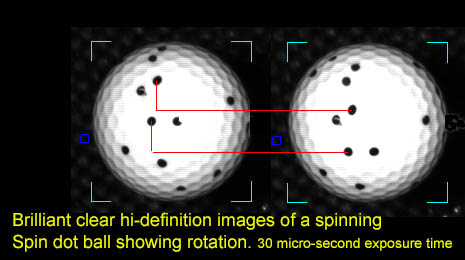 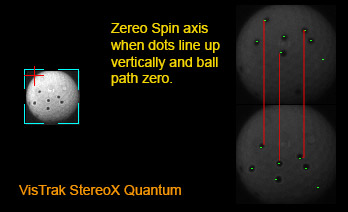 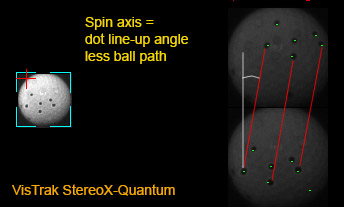 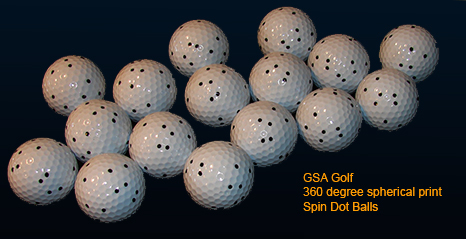 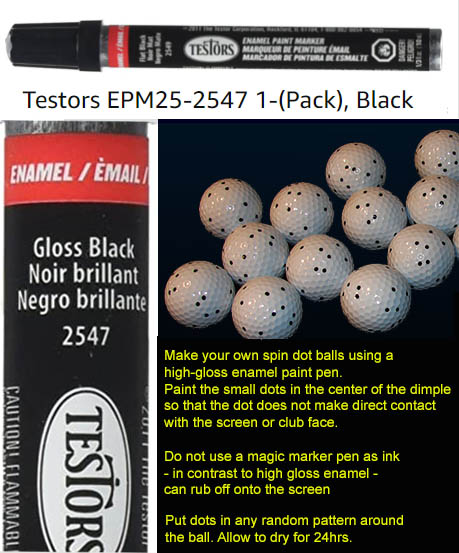 First press down on the tip for a few seconds so that paint is absorbed into the hard felt tip.

Then just dab black paint dots into the golf ball dimples in any random fashion all around the ball while holding the ball with your finger tips.

Note that in contrast to the (comparatively) very large dots that have to applied to the ball with Uneekor systems,

the dots for GSA Golf spin detection systems are really tiny and so fit into the depression of the dimple.

Thus there is little direct contact with the club and screen with them and thus last far longer.

In order to measure ball spin from unmarked balls, super sharp and clear hi-resolution images of the ball have to be captured.

This can only be done with hi-speed (i.e. camera exposure times down to less than 30 micro-seconds in order to eliminate any motion blur of balls traveling at up to 200 mph)

and hi-resolution cameras using IR Xenon flash technology so that the ball dimples can be clearly seen and detected.

Once 2 separate images of the spinning ball have been captured that are only 1 millisecond apart,

dimple edge detection filters have to be applied to the ball images in order to detect the dimples. 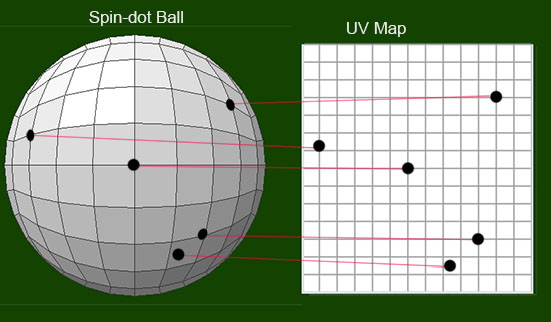 As the dimples are viewed on a curved spherical surface, they have to be projected onto a flat surface in order to make any comparisons.

This is done via a process known as UV projection 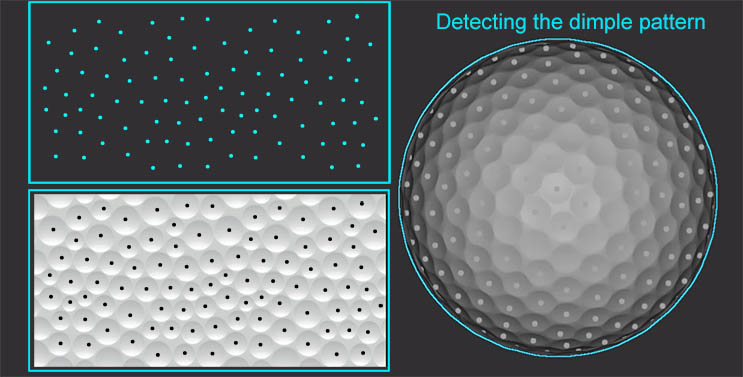 Once we have both UV projection images, the dot pattern can be extracted. 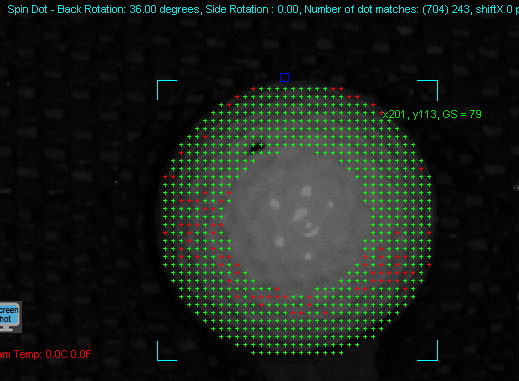 The result of the matching process then determines the amount of ball rotation and its direction within the time of the 2 frames.

From these results, spin rate, side spin and spin axis can be accurately calculated.

Note that: Measured ball spin with balls without markings is currently in development at GSA Golf

It'll be a free update so customers can start off with the marked spin dot ball method and upgrade at a later point for no extra charge.

After all, if the likes of Mevo and Trackman require users to apply a metallic dot to their balls and bend down to align the dot to the direction of play for every shot,

then spin dot balls - that don't require any of this - should be a very welcome blessing. 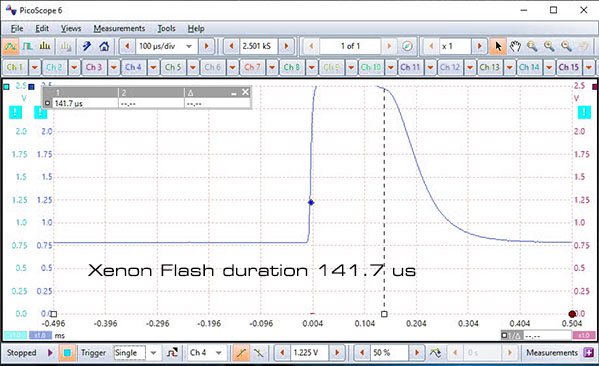 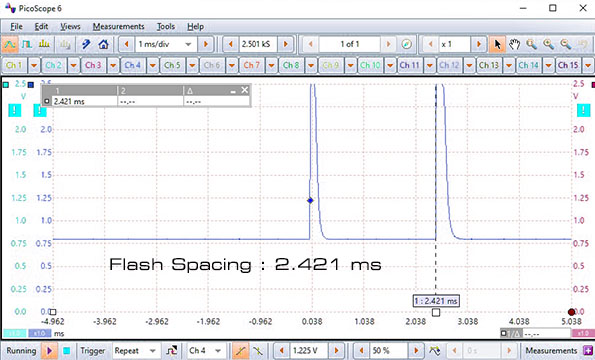 The above Xenon flash scope images were derived from an optical sensor hooked up to the oscilloscope.

They show flash duration and the flash timing between the 2 ball spin cameras.

While this is just fine if the camera system is viewing the ball from the side as a full 360 degrees of back spin can be viewed,

but when viewing the ball from above, only around half that (i.e. 70 degrees) of rotation can be viewed before the dot pattern rotates out of the FOV of the cameras. 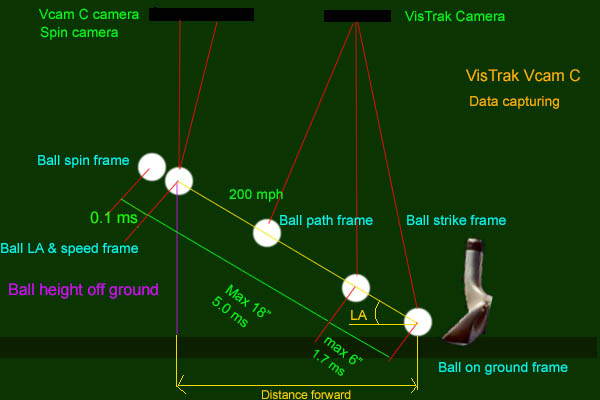 7. The ball path - left or right - is detected by the VisTrak camera as is the club speed, face angle and club path 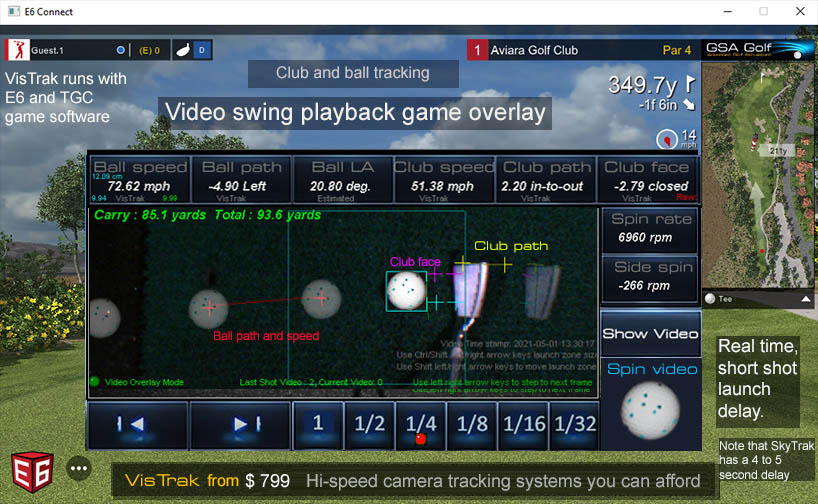 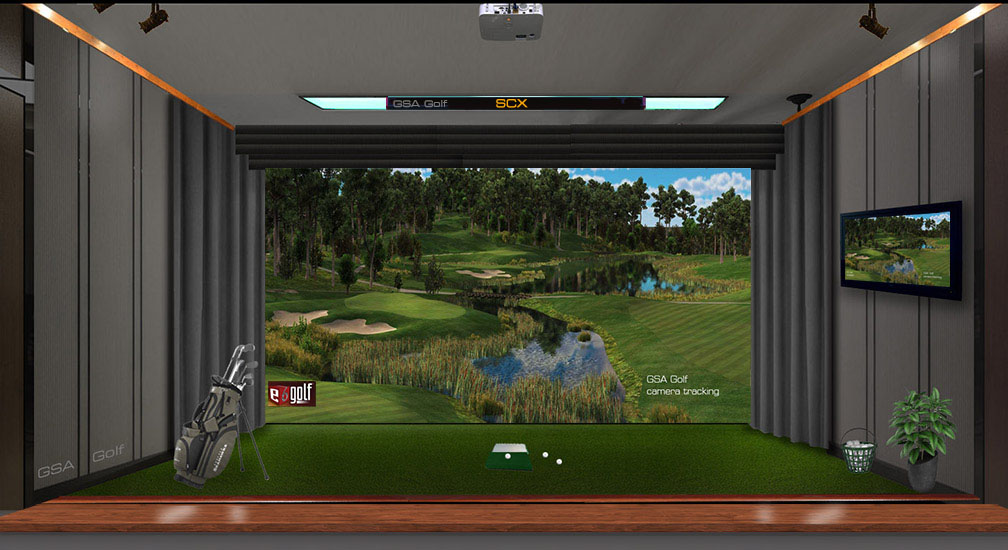